Thereâ€™s only one thing worse than a clogged toilet, a toilet that always seems to get clogged. While unclogging your toilet in the moment is the first course of action which you should take, you may find that all it takes is a couple of uses for the problem to come back. Of course, nobody wants to have to unclog their toilet on a daily basis. In this article weâ€™ll not only look at the bestÂ ways to unclog a toilet, but the best ways to keep it unclogged.

Obvious, I know. However, a lot of folks who find themselves using a plunger on a regular basis may be surprised to find that their plunging technique isnâ€™t all that great. If youâ€™re like most people, you plunge your toilet until the water in its bowl has gone down. While this is certainly what you want to see in the short term, it wonâ€™t do a whole lot for you in the long term. If you see even the smallest bit of toilet paper sticking out from the toiletâ€™s bottom hole, keep plunging it until no visible debris is inhabiting the hole in question. After which, take another twenty seconds or so to plunge it some more. More often than not, this will greatly reduce the occurrence of clogs in the future. If not, it may be time to take some of the more drastic measures listed below.

A “snake,” in this sense, refers to the long wire you can buy at supermarkets and hardware stores which allows you to reach into a drain and pull out blockage. After purchasing a snake, follow its instructions to remove any blockage from your toiletâ€™s drain. Now, just because nothing comes out after your first pass doesnâ€™t mean thereâ€™s nothing in there. Make sure youâ€™re getting as deep in the drain as you possibly can and repeat the process until you latch onto something and pull it out. Even if you only pull out the slightest bit of material, this is often indicative of a larger mass deep in the drain. If after five tries or so where you pull out absolutely no debris to speak of, youâ€™re best trying out the next method listed below. 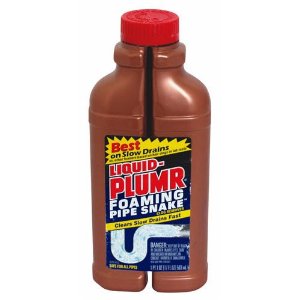 Liquid Plumber (when capitalized) is a brand name, though its also a general term describing any liquid you can purchase at supermarkets and hardware stores which is meant to unclog your toilet. Any old brand will do, as they all serve the same purpose. Liquid plumber works to remove blockage deep in the drain that a snake just canâ€™t touch. Simply pour a bottle into your toiletâ€™s bowl and flush. After doing so, give it a good plunge just to be safe. You wonâ€™t always bring debris up by plunging, though this does not necessarily mean the liquid plumber didnâ€™t do its job. If even this method is unable to tackle your toiletâ€™s clog(s), itâ€™s time to call a real plumber. You either have a large clog which even liquid plumber canâ€™t handle, or you simply have a low-flow toilet which is prone to getting clogged. No matter the cause, your plumber will know.

View all posts by Admin

Our Recommended Toilet – The Winner!